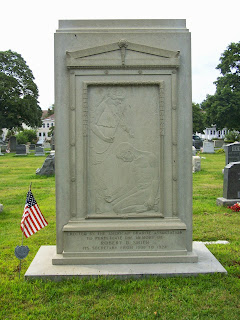 I'm sure I'm missing some symbolism here, but here goes. The marker put in place in memory of Robert Smith shows an angel playing a violin floating above a slouched, naked man holding a quill pen in his right hand and a small hammer just dropping out of reach of his left hand the combined tools of the granite industry and a man of letters. Beneath this image are these words:

Erected by the American Granite Association
to Perpetuate the Memory of
ROBERT D. SMITH
Its Secretary from 1906 to 1924

This just goes to show just how big the granite industry once was in Quincy. The city went through several huge changes in identity over the last two centuries. Two of the first six United States Presidents were born here. Granite quarrying became so important here that the city boasted the first railroad in the United States. Then, when that industry died, shipbuilding moved to the forefront.

The scene is certainly a snapshot in time, of a once-proud industry in a still-proud city.
Posted by John Galluzzo at 8:24 PM No comments: 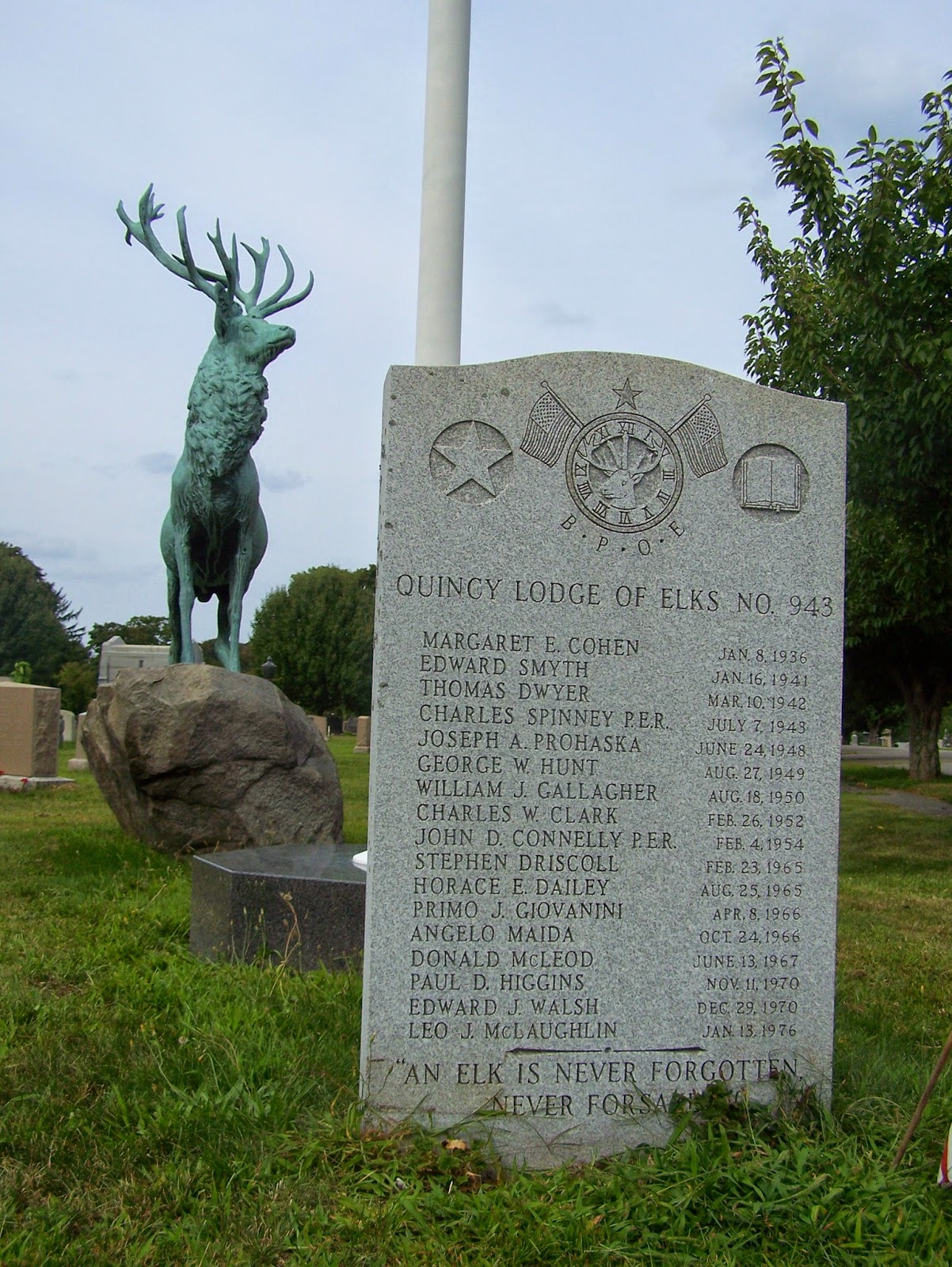 It's an elk! The Quincy Lodge of Elks, No. 943 has not only a stone with names and dates an the Elk toast "An Elk is never forgotten, never forsaken," but a flagpole and a huge statue of an elk. How cool!

The Benevolent and Protective Order of Elks (that's BPOE, or "Best People on Earth") formed in 1868, splitting off from another group known as the Jolly Corks, a group of New York minstrel show performers who were A) trying to avoid taxes and B) known for using cork tricks to win free drinks in bars. Somehow, out of all of this, they came to the idea of doing great things for their communities, and today there are about 1 million members nationwide. Looking for a charismatic species of megafauna as their symbol, they voted 8-7 to stand behind an elk instead of a buffalo.

The list of famous Elks is a mile long, and includes six United States Presidents, a slew of politicians and everyone from Lawrence Welk to Babe Ruth to Clint Eastwood. Here in Quincy, the Elks own one of the most well-known gathering places in the city, the Tirrell Room, named for the first Exalted Ruler of the Lodge, Fred Tirrell. The Quincy Elks are as active as they ever were, and still doing wonderful things for the South Shore of Boston. And with their memorial at Mt. Wollaston, they will never be forgotten!
Posted by John Galluzzo at 8:21 PM 1 comment: 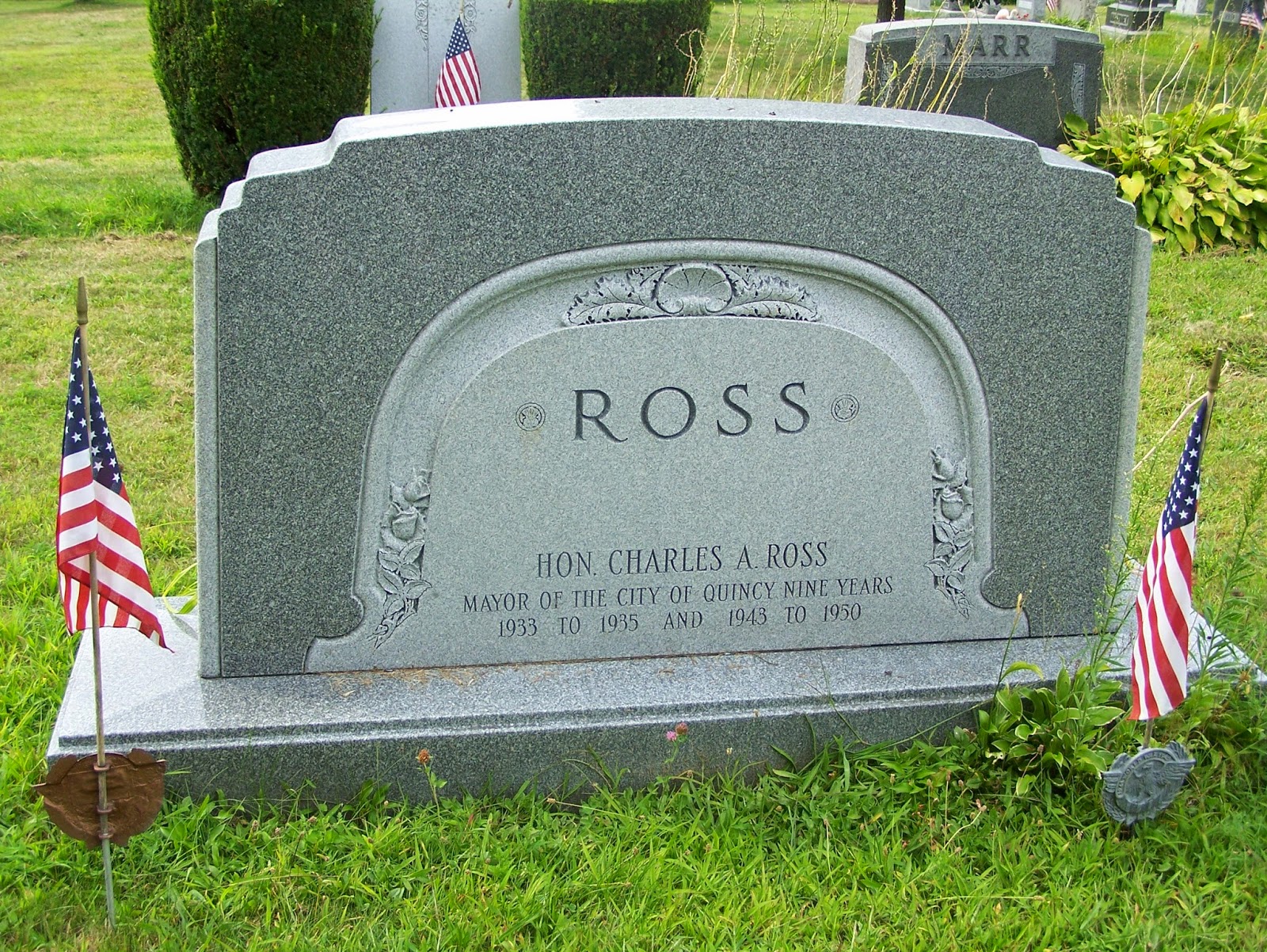 I often wonder how long the Boston accent has been in place. I'm guessing that back during the Depression it was in full swing. I think that cadences, word choices and other speech patterns have changed enough over the years that we might have problems fully understanding everything that came out of the mouths of our forbears in a time travel incident. "Ten thousand thundering typhoons! I met this killer-diller of a B-girl at the speako, but she turned out to be a chizz." If you ever want to read a fun list of automat-related food terms from the 1930s, check out Mark Kurlansky's The Food of a Younger Land.

The Honorable Charles Ross, two-time Mayor of Quincy, probably got the lingo, even with the Boston accent, which turns "killer-diller" into "killah-dillah" and "mayor" into "may-ah." Scottish by birth and a piano tuner by trade, he steered the growing Quincy metropolis though the Depression before being chased from office under a financial scandal. He then came back for a second go-round during World War II, so it couldn't have been all that bad: "Mayor of the City of Quincy Nine Years: 1933 to 1935 and 1943 to 1950."

At one point, the hepsters thought he was a schlepper, but he was really a macher. I read it in a blat at a clip-joint.
Posted by John Galluzzo at 8:19 PM 2 comments: 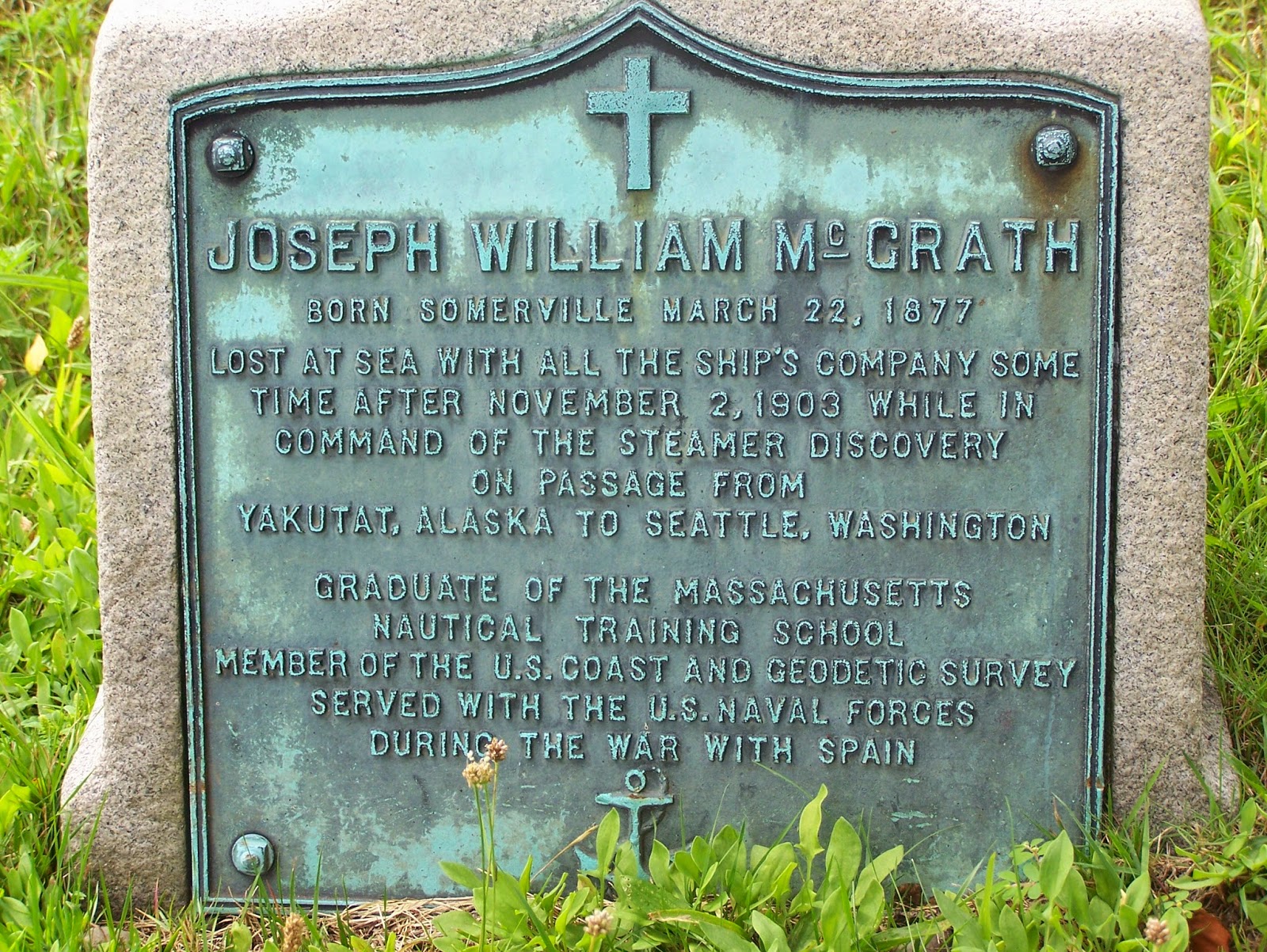 I hopped over to the Mt. Wollaston Cemetery in Quincy, Massachusetts, to check in with the people of the city's lost shipbuilding and granite industries. I figured that, if nothing else, I would find some fantastic gravestone designs, as the best artisans in the northeast worked there in the 19th century.

But, of course, the first words I read were "Lost at sea."

Joseph William McGrath was a "Graduate of the Massachusetts Nautical Training School," (now the Massachusetts Maritime Academy); a "Member of the U.S. Coast and Geodetic Survey," (now a part of the National Oceanic and Atmospheric Administration); and "Served with the U.S. Naval Forces during the War with Spain" (the Navy will always be the Navy; Semper Fortis!). He obviously had quite the career, considering he died around 26 years old.

As far as history can discern, he was "Lost at sea with all the ships company some time after November 2, 1903 while in command of the steamer Discovery on passage from Yakutat, Alaska to Seattle, Washington." The President of the Discovery Transportation Company, the entity that owned the vessel, filed a wreck report with these details:

“Revenue Cutter Rush was sent from Sitka after some weeks, but found no tidings. Since then report comes of Indians finding hull of vessel. This has not been confirmed. Parties coming from Cape Yakataga to Kayak, in November report finding doors, windows, and broken parts of steamers house on beach, also life preservers marked Str Discovery. This is same way the Discovery life preservers were marked.”

“We are convinced the Discovery is lost with all hands on board.  The exact time and how the accident occurred will never be known.”


So ended the life of Joseph William McGrath in company with about 29 others. Rumors say that several people stayed on land, claiming the ship was not seaworthy. That fear may have saved their lives.
Posted by John Galluzzo at 7:56 PM No comments: 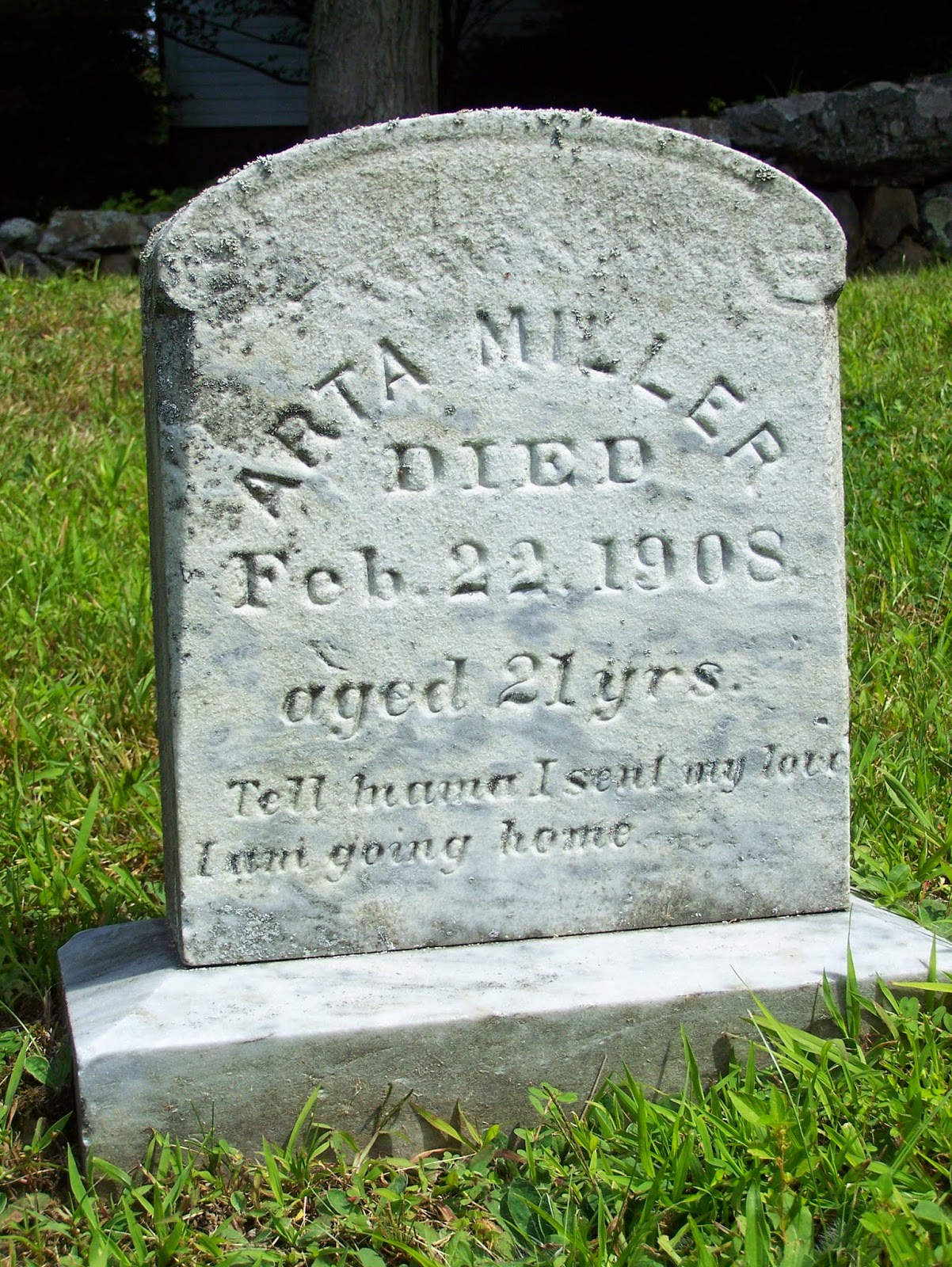 There was a little book written in 1876 called I Am Going Home, or the Memoir of a Gathered Lily. The symbolism is a little blunt, of course, but we get it. The author wrote of the life of a young woman taken before her time, "home" being Heaven.

So it was with Arta Miller, "aged 21 yrs." She was born within a decade of the book's publishing, during the rise of American libraries, so it could certainly have been on a shelf somewhere at home or nearby. Either way, the sentiment on her stone is the same as found throughout the pages of the book, "Tell mama I sent my love. I am going home."

I think the concept of knowing I am going to die imminently, whether it's within months, weeks, days or hours, still scares the hell out of me. I only hope that I can handle it as bravely as Arta did should it come to it. Perhaps my last words will be so inspired, and not be as comical as I right now intend them to be. Or perhaps I will have both, and my last words will be inspiringly funny.
Posted by John Galluzzo at 7:53 PM No comments: 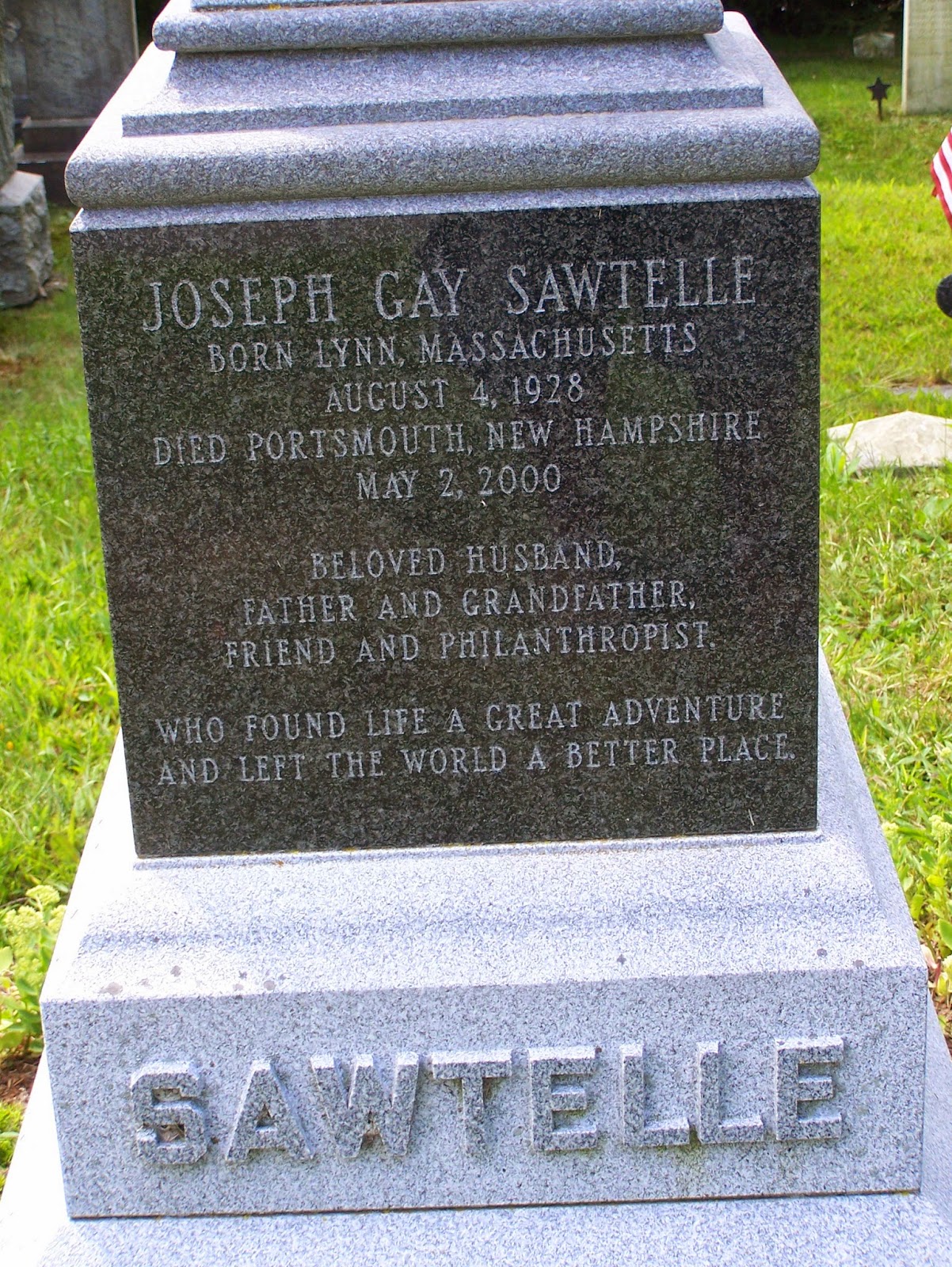 The Sawtelles were two North Shore of Boston kids who moved to coastal New Hampshire, and people who just got it. He was a "Beloved husband, father and grandfather, friend and philanthropist who found life a great adventure and left the world a better place." She was a "Beloved wife, mother, grandmother and friend who lived and loved with all her might."

I can only dream of having such words on my stone when all is said and done. To me, they sum up what life is supposed to be all about. 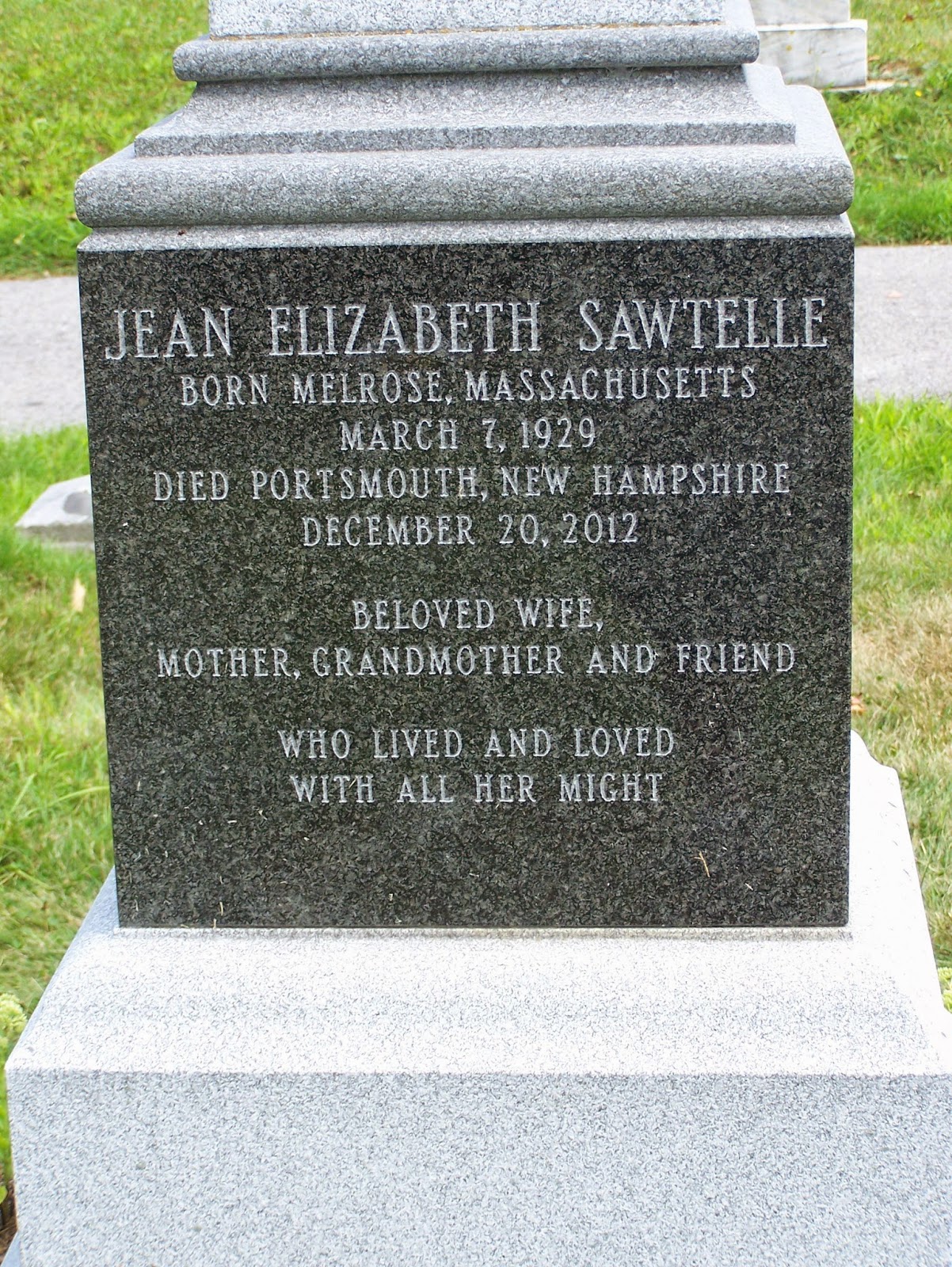 Posted by John Galluzzo at 7:50 PM No comments: 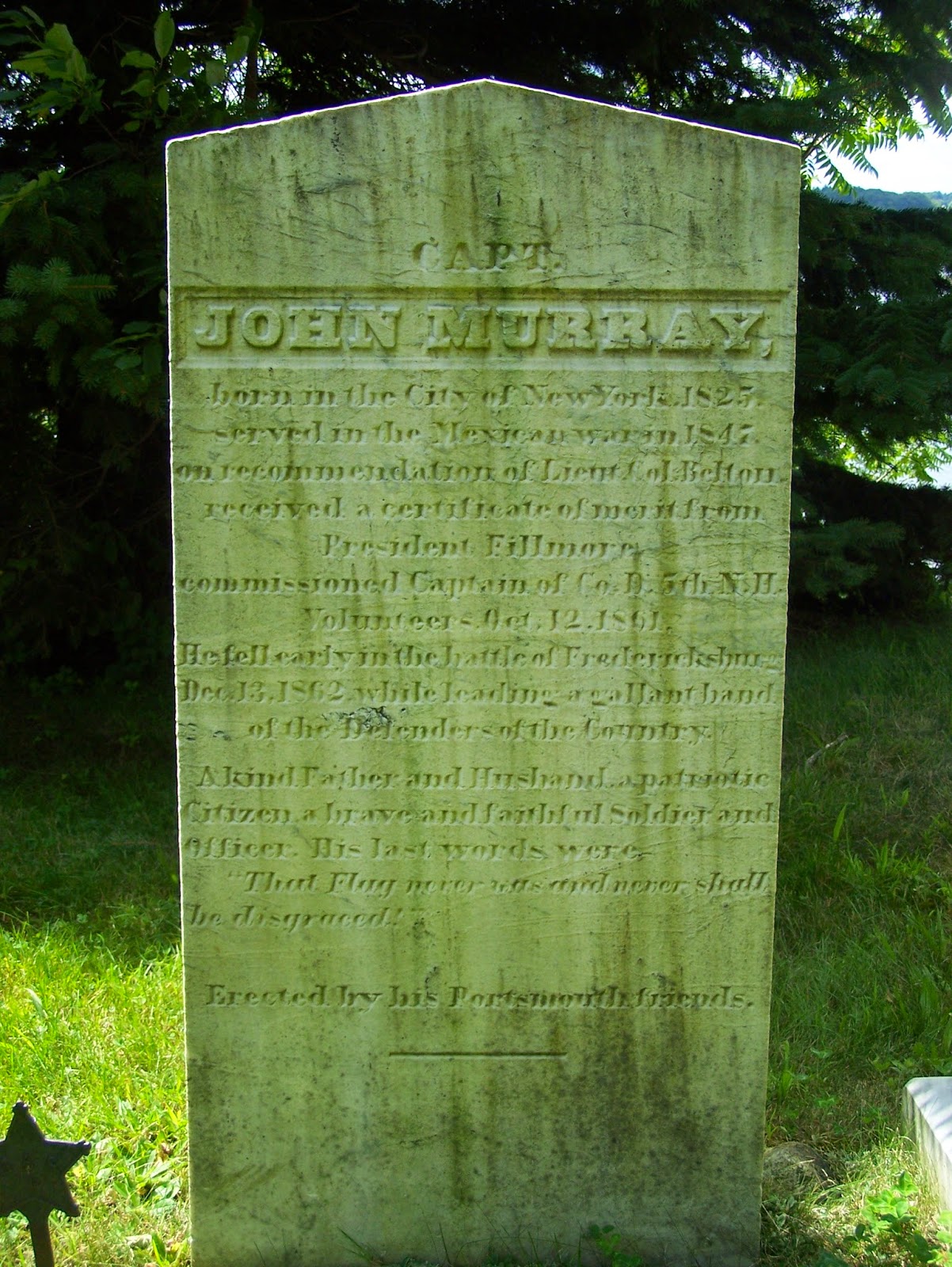 Ladies and gentlemen, we have a novella.

Captain John Murray's friends made sure he was properly remembered for all time by erecting his stone at Riverside Cemetery with an excellent recap of his military exploits in the middle of the 19th century. Here is the full story:


born in the City of New York in 1825.
served in the Mexican War in 1847.
on recommendation of Lieut. Col. Belton
received a certificate of merit from
President Fillmore
commissioned Captain of Co. D 5th N.H.
Volunteers, Oct. 12, 1861.
He fell early in the battle of Fredericksburg
Dec. 13, 1862 while leading a gallant band
of the Defenders of the Country.

A kind Father and Husband, a patriotic
Citizen, a brave and faithful Soldier and
Officer. His last words were:
"That flag never was and never shall
be disgraced!

Captain Murray's certificate of merit was no small honor. Lieutenant Colonel Francis S. Belton had been at it since the War of 1812 and didn't retire until the Civil War had started. He knew a good soldier when he saw one. He's kind of a forgotten military personality of his time. We're left to wonder, as always, what our good Captain would have achieved had he not died when he did.
Posted by John Galluzzo at 7:46 PM No comments: