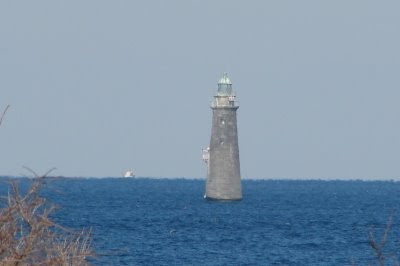 From the moment that you step beyond the gates, you know you're not in the real world any more. This is the Glades, a mystical, private, historic place.

The road is narrower, beyond the gates. And it's not even the same texture as the road outside. The dense forest on either side of the road closes in on you, bringing the wildlife within reaching distance. At this time of the year, it's the usual suspects: chickadees, titmice and robins, lots of robins.

There's a second gate, and a break in the woods. A few months ago we chased a southwestern visitor, a cave swallow, here, right on the rocks. Pulpit Rock is just behind the brush, where invisible preachers toss their words onto the breezes and out to sea. The seaside forest closes in once again, and then fades toward the point. Minot's Light stands coldly out in the distance.

As I tromped, a blue jay alarm-called to my rear. Before I could spin around a Cooper's hawk dove over my left shoulder and flew up the road. But all I got was a hind quarters look as it tore the air with its wings. At the point, I spied on the harbor seals sunning themselves on the offshore rocks. I don't think they saw me.

I turned for home in view of the old Glades House and as I did, the Cooper's hawk returned. It took no heed of me as it plunged into the brush ahead of me in pursuit of a very frightened robin. Less than half the killer's size, the robin escaped through a passerine-sized hole, and lit in a nearby tree, chirping a warning to its friends. The hawk extracted itself and circled the tree, but gave up and headed for the shoreline. As it landed on a flagpole cross-arm, a red-tailed hawk took its place in the sky.

The Humane Society - the one with all the lifeboat history, not the one that saves cats and dogs - had a lifeboat station out here, and it still stands today. The echoes here are of Hunnewells and Addams's, of talk of yacht races, and high times in the 19-teens. There are rumrunning memories here, too, including the scary story of a Coast Guardsmen beaten senseless by bootleggers while on patrol. There is more military history here as well, with observation towers looking out to sea.

One almost hates to leave the Glades, as if leaving it behind is stepping out of a fantasy world that is part safari, part time travel. But such was my fate today.

Time: 62 minutes.
New species: None.
Stranger hellos: 5 (44)
What else got done: half a day of work; dinner with Taylor and Tabitha in Sharon; doctor's appointment (ear, thyroid); gave a talk for the Foxboro Historical Society on Life-Saving Service history.
Posted by John Galluzzo at 7:48 PM